Platte Architecture + Design, a Cincinnati firm that specializes in renovating historic buildings, has had 12 architects and project managers evaluating approximately 22 buildings in the downtown area this week.

Those buildings are approximately half of the 40 downtown properties owned by The Van Wert County Foundation (VWCF), which is working with Pago USA, a group comprised of experienced development professionals, on an ambitious project to revive the downtown area. Pago development projects include the Over the Rhine historic section in Cincinnati, as well as The Landing project in downtown Fort Wayne, Indiana.

Kurt Platte, founder of the Cincinnati architectural firm, said his firm’s excellent relationship with The Model Group, a Pago USA development firm, was the reason they became involved in the project.

“We have come to specialize in the preservation and revival of historic buildings,” Platte said. “We’re really big at bringing these things back to life.”

The Cincinnati architect added it is especially exciting to be working with The Model Group again, because of the firm’s wizardry in finding funding sources for development projects.

“They’re the best ‘chess players’ at this game that I’ve ever come across,” Platte said.

Also helping the Cincinnati architectural firm with its investigative work is Revival Design Studio, a six-person architecture and design firm based in Celina that has been involved in historic revival projects in several Ohio communities, including Bellefontaine, Marion, and Delphos.

Platte said the Celina firm’s assistance was very much needed once he learned the huge scope of the local project. The Cincinnati architect said he came in expecting a fairly small development project, based on the size of Van Wert, but was astonished when he learned how many buildings were involved.

“They (the Foundation and Pago) have thrown more buildings at us than we’ve ever had in our big town (Cincinnati); it’s impressive,” Platte said. “It was not our expectation.”

Noting that taking on the entire Van Wert project would have put a significant strain on his 20-person firm’s resources, Platte said he was pleased when Revival Design Studio wanted to get involved — something that happened mostly because of CEO and Van Wert native Cally Lange’s interest in the project.

Lange, the daughter of county residents Roy and Jana Ringwald and a 2001 graduate of Lincolnview High School, went on to earn a master’s degree in architecture from Ball State University before starting the Celina design firm. The county native said she is very pleased to be a part of the project for a number of reasons. “It’s really cool just to be part of the team,” she said. “I’m super thrilled and excited.”

The Revival Design CEO and creative director added that, when she learned of the project, she didn’t hesitate to offer her firm’s help. “I said, hey, however we can help, we want to be involved,” she remembered.

Fortunately for Lange, Platte was also realizing this was a bigger project than his firm could take on without sacrificing other clients and projects.

“This isn’t something we could have tackled on our own,” Platte said. “Even with our size firm, we needed more people.”

In addition to providing assistance to Platte, Lange said the project will also be a learning experience for her firm, with Platte providing valuable mentoring, as well as the future possibility of similar projects for her small design group.

Lange stressed, though, that downtown renovation in general — and Van Wert’s downtown in particular — are very important to her.

“For me, these downtowns are the most important connection between the generations in a community,” she noted, adding that she remembers stories her parents told her about shopping in downtown Van Wert. She especially remembers her mother talking about how her parents would buy her school shoes once a year at J.C. Penney in the 1960s.

Lange said those stories, and the downtown’s connection to her family, makes this project personal for her.

“For me, keeping these buildings going is not an option, it’s a requirement,” she said. “It’s something we are absolutely responsible to do.”

Platte agreed, noting that, growing up in his hometown of Columbus, he remembers the downtown being dead in those days, a situation he said negatively affected the economic health of the entire community.

“They’re solid buildings; these buildings are in really great shape, compared to some of the buildings we see,” Platte said of their investigation, noting the local buildings are in much better condition than those in Over the Rhine projects in which he was involved.

Lange agreed, noting that several Van Wert buildings she has looked at have 3-by-13-inch floor joists — unheard of in modern buildings. “They’re like tanks; far superior to new construction.”

That doesn’t mean there won’t be challenges. Lange said accessibility and how to get the buildings to meet modern building codes will be just some of the problems ahead for the project.

Foundation Executive Secretary Seth Baker said his organization is looking at a multi-phase development project for the downtown area, although what that will look like, and which buildings are involved in which phase, and when, remain unknowns at this time.

Although the work done by the Platte and Revival firms provides important information on which to base future decisions, Baker said there are still more unknowns than knowns, when it comes to the project.

Baker said one thing is known: the buildings with the most renovation challenges are the top early priorities. That’s because, without relatively quick action, those buildings may not survive until it’s time for them to be developed.

“In a sense, we’re tackling the buildings that really need the fastest save,” he noted.

The Foundation executive secretary did admit that the Foundation and its development partners first looked at the downtown intersections, Main and Washington and Main and Market, as the place they would like to begin, because of their high community visibility. However, it was the dilapidated condition of the Home Guard Building and other structures that resulted in a change of priorities for the project.

Meanwhile, as if assessing the condition of a large number of older buildings isn’t enough to tackle, the Foundation and Pago USA are working simultaneously with OHM Advisors on the myriad planning challenges of the project.

Down the road, as the project begins to shape up more, Baker and VWCF Marketing Director Amanda Miller said the Foundation will begin seeking community input on the project.

“We will go to the community and ask: What do they want? What are they looking for?” Baker said.

The Foundation also plans to provide more updates on the various aspects of the project.

For more information on Van Wert Forward, or to get involved, visit www.vanwertforward.org or contact Hall Block at hall@vanwertcountyfoundation.org or 419.238.1743. 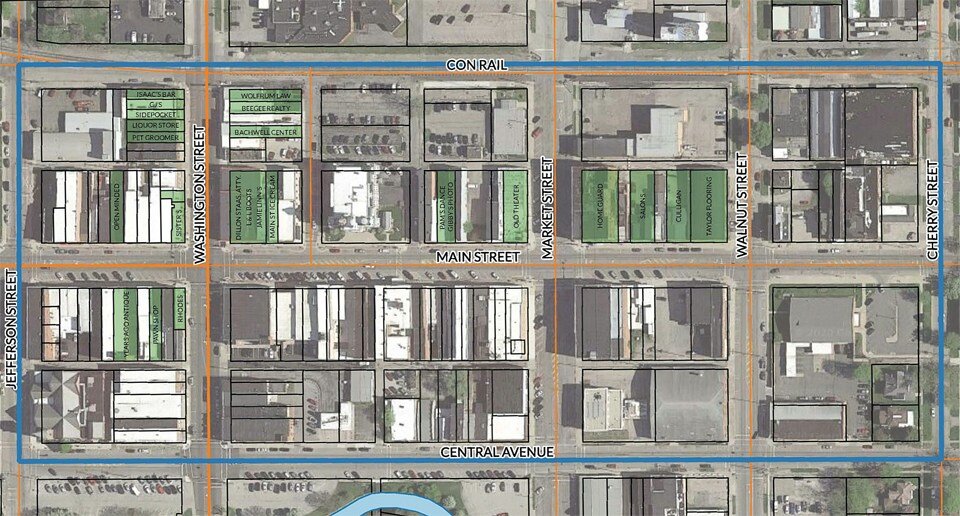