A new frame of mind

As the first half of 2022 comes to a close Van Wert Forward is continuing on schedule for construction updates. Much of the foundation stabilization work in the Oddfellows Lodge has been completed and crews are moving on to new installations. Plumbing, electrical, water lines, and HVAC ventilation have all been installed in the basements of the storefronts and are being installed on each floor above them. As contractors work from the bottom up for utilities, they will also be working from the bottom down for wall frames. Wall frames are also being installed on the third floor of the Oddfellows Lodge. The two largest apartments in Phase One (1,800 sq. ft. and 1,600 sq. ft.) have nearly finished framing installation and the other three apartments on the third floor will be wrapping up construction shortly. 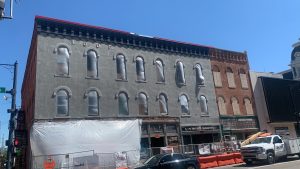 One of the more visually exciting changes is exemplified by the parging and painting of the front facade of the Oddfellows Lodge. The brick frontage facing Main St. was coated over with an original layer of concrete from 101-105 E. Main St. These three storefronts were sounded to determine how strongly adhered the concrete was to the brick. Some pieces were loose and liable to fall, but much of the original parging was still sound. Construction crews then filled in the cracks and missing pieces with new concrete parging over the same area. Some of the concrete facade was removed from the window arches above 107 E. Main St. to reveal them fully, but the rest of the parging will remain. Since the concrete has dried, contractors are now able to paint over the concrete with a potassium silicate mix. This mix allows for breathability of vapor meaning moisture will not be trapped beneath the concrete attached to the brick. As people drive downtown the first layer of blue paint can be seen on the cornice. 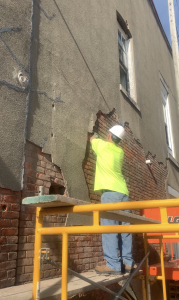 The Oddfellows Lodge will have intensive work conducted on its northernmost wall (the side of 110 N. Washington in the alley). The wall is structurally failing and will be torn down and rebricked. Previous work on the wall had created structural failings as the openings built into the side of the building failed to properly support the weight of the building above the openings. Thankfully, the building wall had not collapsed, but to ensure the safety of a new operator the wall is being fully rebuilt, not just repaired. The removal and subsequent rebuilding will begin in the next few weeks. Once the wall is safely reinstalled, wall framing and utility work can commence in full force in those spaces. The crew has focused on other areas of the building until such a major project can be completed. 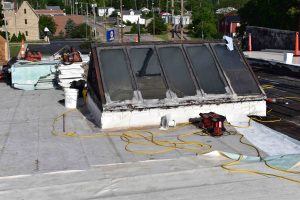 Work is also pivoting from the Oddfellows Lodge to the McGavren Block by the railroad tracks on N. Washington. Construction crews have been a total roof replacement on the 3 address building. The current roof is leaking which had caused floors to collapse in various spaces of the building. The flooring issues have been addressed as part of the stabilization efforts in the building. The roof updates are to safe keep the work that has been finished. The McGavren Block was previously roofed with a rolled rubber substrate, and the same style of material will be used to replace the roofing needs. As work finishes in the Oddfellows Lodge, more focus will be directed to the McGavren Block and the Miller Brothers building. These buildings will host 14 apartments and 4 commercial spaces.

The VWCF focuses on creating a well-resourced and thriving quality of life for our community by supporting purpose, inspiring growth, and building the future. Van Wert Forward is focused on transforming quality of place in our downtown built environment. Questions about The Van Wert County Foundation and Van Wert Forward can be directed to Joel Germann, joel@vanwertcountyfoundation.org.